A growing trend in financial institutions is performing rule-based auto elimination on secondary attributes. So for example when we have a match on a name; but a mismatch on a secondary attribute such as date of birth, nationality, or location; then the match will be eliminated before a person looks at it.

We at SQA Consulting only encourage this practice, but it should be done with care, computer-based rules have no lee-way for applying common sense, so your rules should be precise and cover all eventualities.

In a previous article, we gave examples of where it would be unwise to eliminate on location miss-matches where there was ambiguity in the name. So would it be wise to eliminate if we have a definite miss-match on Country? Not always. Some countries are closer together than others, and the ultimate in closeness are those that share an open border. With these countries, it is possible to travel without restriction from one country to another. Perhaps the most well known of these is the Schengen area in the European Union, but there are many others all around the world.

So if I have a miss-match on location of – for example – France vs Belgium (who share an open border), then this would have less credence than France vs India.

The credence of the miss-match influences our confidence in the match, and an open border is the ultimate confidence erosion, but other factors also affect confidence.

Here is an example table of factors that might affect our confidence in a country miss-match.

Other factors about the whole case may also affect the confidence of a location match: 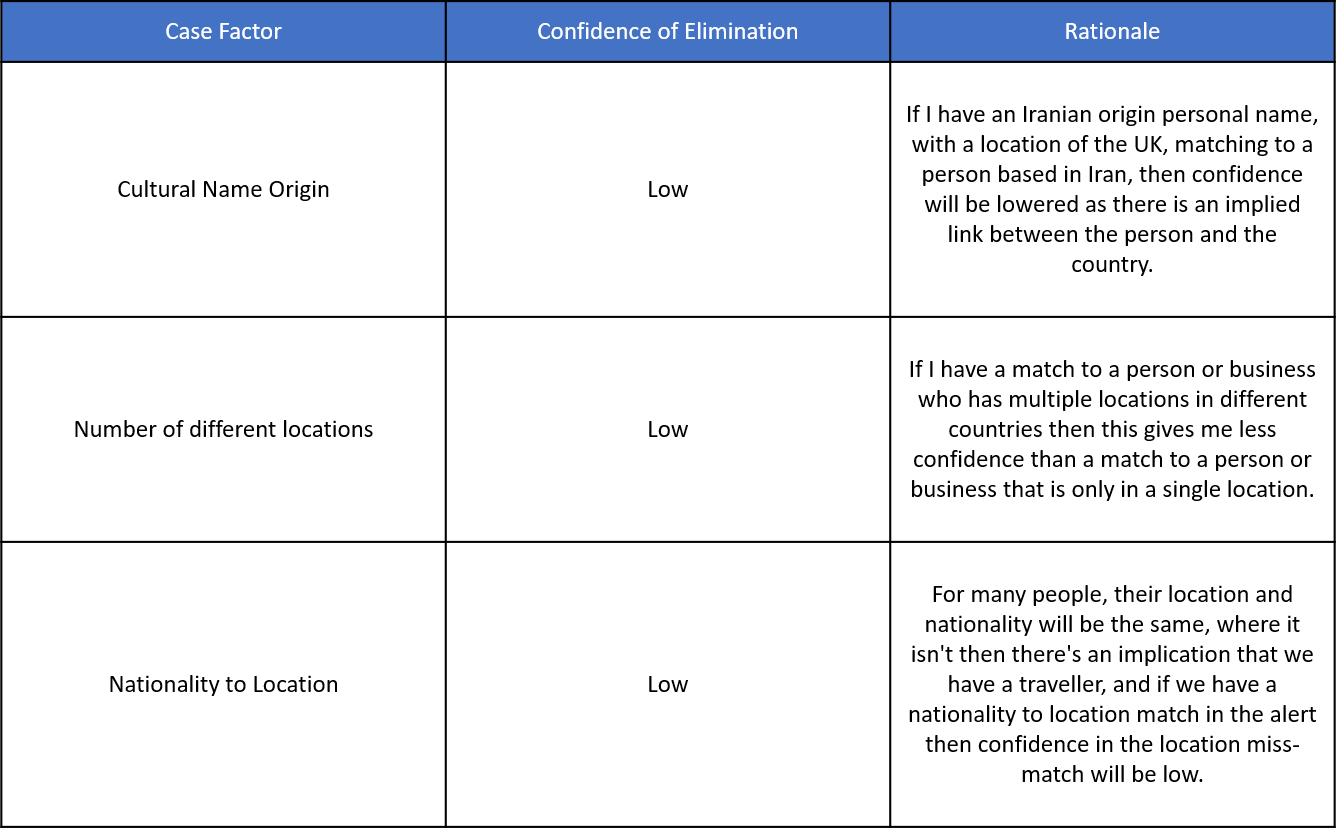 A counter-argument for location elimination is that people will travel, a business will open foreign branches, the world is getting constantly smaller – except for during pandemics. So does location provide any basis for the elimination of an alert at all?

In consideration of all the factors listed above, elimination on location has the potential to be complex with many parameters involved to determine levels of confidence to be used in a balance of probability evaluation. A sophisticated computer algorithm can be of significant assistance to an alert investigator to quickly understand how two (or more) countries relate to each other.

Open borders are not the only issue facing elimination by location: See more like this.